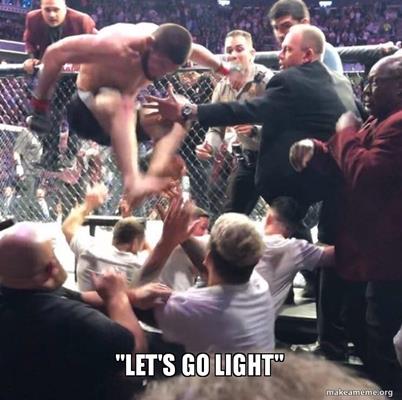 In a single moment, Khabib has tarnished the legacy it has taken him so many years to build. Just look at where Mike Tyson ended up: He won so many fights, but how do people remember him? They remember him as a heavyweight champion, sure, but also as the loose canon that took the ear off of Evander Holyfield.

Khabib may have won the match, but he lost his purse and his pride. The real winner in UFC 229? The UFC itself. MMAFighting.com estimated that pay-per-view buys for the match totaled a record-shattering 2.4 million, meaning big payouts for the UFC and its partners. A rematch would be worth even more.

That's why the UFC and its president Dana White continue courting this sort of douchbaggery, allowing and even helping to publicize incidents like McGregor's assault on a busload of fighters in April. Publicly, White called the bus incident “the most disgusting thing that has ever happened in the history of the company,” but in reality the UFC took no action against McGregor and his scheduled matches went on as planned.

The more outrageous things get, the higher ratings soar. Sadly, a win for the UFC isn't necessarily a win for BJJ. The UFC – the most public face of BJJ – has struggled to build credibility since its inception, with some states banning UFC matches outright. BJJ is still a long way from earning the level of public recognition it deserves, and the WWE mentality we've slid into recently isn't helping.

In ten years of training, I've learned the value of competitiveness, conditioning and technique. But I've also learned the value of discipline and self-control; you can't win a 5-round MMA fight for the belt without knowing how to pace a match. And if you let your emotions run away with you someone is bound to get injured. We all learned about this stuff as white belts, but it seems some of us have forgotten.

I agree with Joe Rogan when he says both sides are to blame for what happened at McGregor vs Khabib. And I tend to agree when he calls the whole situation unprofessional. I also can't help but wonder what it means for the advancement of BJJ as a sport if we stop celebrating the victories of our peers.